Going bald at an alarming rate? It’s right time to opt for baldness treatment for men!

Scientifically termed as androgenic alopecia, most widely known as the male pattern baldness is a condition which is seen in almost a third of Caucasian males in the world today, by the time they reach their thirties.

According to studies, it has been seen that about 6.5 million men in United Kingdom are affected with this male pattern baldness issue in the current time.
While this hair receding condition starts off with a receding hairline followed by thinning of hairs on the temples and on the crown until the patches meet to slowly turn the entire area to bald.

What’s the cause for men to lose their manes?

While the male pattern baldness is usually considered to be a genetic disorder which is caused when testosterone (a hormone) gets converted into DHT which in turn has a drastically negative impact on the hair follicles. The negative impact of the DHT includes stopping or slowing down of hair growth which results into baldness.

While losing hair is not always a thing to worry about unless you want to have hairs for your comfort, at certain times increased tendency to getting bald may point out directly to an underlying and neglected health issue, excessive stress, hormonal imbalances, shock and side effects of medical treatments which needs attention.

While the male pattern baldness is generally a genetic disorder the men all over the world face, there are certain treatments which are figured out by the medical practitioners which kind of help the needy in the times of need. And, sue to the fact that almost a third of UK’s men population start getting affected with this issue from their early thirties, the popularity of this treatment in there is pretty high.

The treatment options in a flash :

While the male pattern baldness treatments finding a lot of takers in the United Kingdom and the other regions all over the world, loads of treatment modes have been devised by the medical practitioners which include the likes of natural homemade remedies which sometimes work along with various medicines and pills which promise reduced baldness in men. Then there are other techniques which include the Mesotherapy, Platelet Rich Plasma Therapy (PRP) and others such as the FUT & FUE hair restorations.

The baldness treatments for men which can be implemented at the initial stages- Mesotherapy & PRP :

What is Platelet Rich Plasma Therapy (PRP) and how does it help in baldness?

Platelet Rich Plasma Therapy is yet another non-surgical therapeutic hair growth option for people affected with hair loss woes such as male pattern baldness, but just as the above mentioned one, it is useful only in the initial stages.
This therapy is an injective mode of treatment which is relatively safe and with a shorter recovery period where a Platelet Rich Plasma (PRP) is injected into the scalp. The growth factors in the blood get to action and the hair growth is thus stimulated automatically. know more about this technique, please

What is Mesotherapy all about and how is it beneficial?

Mesotherapy is a baldness treatment which is used to regow hairs in both males and the females and characteristically helps in treating the concerns of male pattern baldness, but when at the initial level only.
Mesotherapy as a treatment is nothing but a specialized cocktail which on application on the scalp gives a much needed vitamin boost to the region, improving the blood circulation in the scalp which nourishes them and helps in hair re-growth.
This therapy is usually done by injecting the patients with the solution via a gun which is less painful and effectively will neutralize the impacts of the DHT hormones which are the main cause behind the male pattern baldness in the long run.
Thus, Mesotherapy is a treatment which helps re-grow hair in the initial stages and ensures that the tresses are gown back to the maximum extent possible. know more about this technique, please

The treatments which can be implemented at the critical stages- FUE & FUT :

This is a hair restoration technique, rather surgical, which is used in the treatment of male pattern baldness when the matters are critical and uses the patient’s hair which is transplanted in the form of naturally forming groups of about 1 to 4 hairs collectively called follicular units by the surgeons. To know more about this technique, please

The Follicular Unit Transplantation technique includes the process where the hairs from the permanent zone such as the sides and the back less prone to balding are picked up and transplanted into the area of baldness by the doctors. This technique is usually taken into account only when the male pattern baldness issue is at an extremely critical situation. In case you want to know more, please

Where medical fraternity has come up with an array of treatment methods in case one is suffering from even the most critical form of genetic hair loss concern such as the male pattern baldness, people in UK need not feel morose as the treatments will ensure that the scalp is once again full of hairs in no time!

This entry was posted on Friday, January 8th, 2016 at 10:14 AM and is filed under Follicular Unit Extraction, Hair Loss Treatment, Hair Transplant, Hair Transplant News. You can follow any responses to this entry through the RSS 2.0 feed. Responses are currently closed, but you can trackback from your own site. 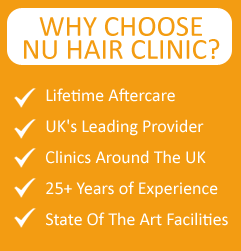 Read What Our Clients Say About Their Experience With Us. Click Here.